The polling feature employed by DX4WIN and other software can cause CI-V collisions that will cause the PW-1 to change bands during transmission, sometimes with catastrophic results. This is due to a design defect of the PW-1's CI-V circuitry, not the CI-V bus architecture itself.

There are at least four solutions to this problem:

Larry has written an excellent study of this problem entitled Riding the CI-V Bus. I chose the K9JM router as I already have a homebrew control system for interfacing my two radios with a computer and antenna system.

Normally, one connects all CI-V devices to the CI-V bus, as illustrated below:

Jim Michener K9JM has a solution that isolates the PW-1 from the rest of the bus, and it can be implemented as shown below:

Jim's router has a USB interface to the computer and three separate 1⁄8" jacks for the CI-V bus. The important thing is that the PW-1 must have its own (dedicated) CI-V connection. His router is powered from the USB bus, so you do not have to use a separate power supply. If you prefer, you can program the CI-V router to a different rate such as 9600 baud. It is recommended that you keep the USB computer interface at 38.4K baud.

See Jim's article, ARDUINO BASED Icom © K9JM CI-V ROUTER for more detail. Jim uses an Arduino MEGA 2560 for controlling his CI-V board. You can see the board detail on the Arduino web site. The Arduino board provides the USB interface to the computer. Jim's CI-V board plugs onto the top of this board.

You can buy just the CI-V interface board itself and order the Arduino board and case off of the Internet, or you can order an assembled and tested unit. Jim has several links on his web site to guide you if you want to do it yourself. He also has detailed instructions on how you go about programming the Arduino board and his CI-V control software to make it all play.

A useful feature of Jim's board is that now DX4WIN continues to work if you turn your radio off. Previously, if you forgot to click on "Stop Radio" under the Radio pull-down button, DX4WIN would hang until the retry counter timed out.

Below is a photo of the Arduino MEGA 3560 board.

Jim's board plugs onto the top of this board, as shown in the next photo: 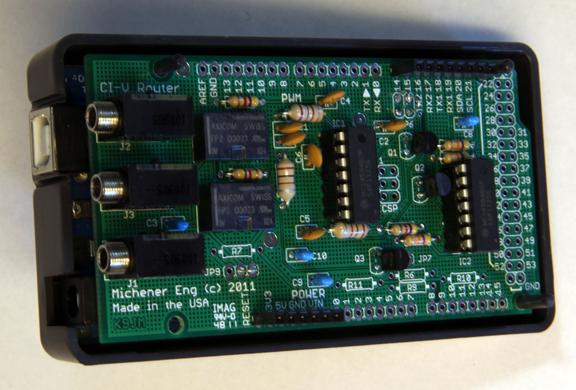 The completed unit is as shown below: 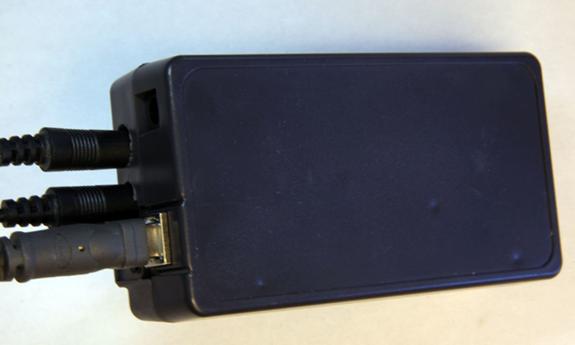